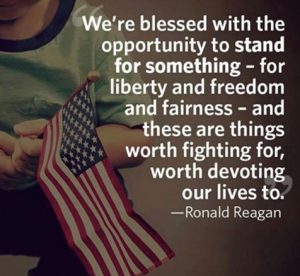 (This post appeared in the July 2018 issue of Senior Review)

So, what’s so great about America?

These days that phrase is hurled around by partisans and media pundits, almost like an pejorative or curse.

What’s great about America is that you have the right and freedom to stand up for what you believe in.

As a Doctor of Physical Therapy my focus is freedom.  In that spirit, let me take a moment to share some of my beliefs.

It isn’t so much that liberals are ignorant. It’s just that they know so many things that aren’t so.” – Ronald Reagan

First, far too often today we become highly educated on things which simply are not true.  One popular academic lie is that science has all the answers to life.

While legitimate quality research helps explains many things, it can’t dictate how we should morally and ethically live; only faith can (Vicki McKenna Radio, May 2018).

Second, Christianity provides us the best direction.  I love praise music and the church environment because it nourishes me spiritually while relaxing my mind and my whole nervous system … sometimes too much.

Yes, I have been guilty of falling asleep in church.  However, despite periodic snoring, I understand and appreciate how incredibly important faith and a trusting relationship with God is, both to the individual and to the nation.

America was uniquely founded on Christian principles and values. Our trust in God has been the biggest driver of ongoing freedom, independence, human dignity, and both amazing and meaningful innovations – both in our own country, and around the world.

In God We Trust

In fact, for or our Constitution to work, the nation as a whole must embrace uniquely Christian values.

“In God We Trust” has been the official motto of the America since 1956.  This focus is part of the glue which keeps our diverse nation together. Without it, the natural consequence will be that  America as we know it and love it will fall apart.

For example, the artificial and legally-enforced secular absence of God in our schools today has not created a liberating “freedom from religion” as so many of opponents of faith – particularly critics of Judeo-Christian faith –  have long sought to impose, it has also created a profound cultural emptiness, as well as a creeping lack of discipline, purpose and patriotism.  This void enables evil.

Third, humans have an innate need to believe in and aspire to something that is greater than themselves.

As Europe has evolved away from Christianity and has become increasingly liberal (actually an illiberal authoritarianism), hundreds of European-born women have pursued allegiance with and support for the Islamic State of Iraq & Syria (aka ISIS) in spite of how horribly and barbarically women in particular and non-Muslims in general are treated under the auspices of that oppressive and dehumanizing ideology.

A common rational presented by many anti-Christian liberals is that at least the followers of ISIS believe in something and that Islam promises them purpose.(https://www.cbsnews.com/news/regrets-felt-by-young-women-who-fled-europe-to-marry-isis-fighters/)

Aside from the implication that Christians and Jews and the followers of other Western faiths don’t believe in anything or anything of value that inspires them with valid purpose, this is a gruesome example of how without trust in God a nation’s contemporary culture enables evil to take over and dominate the minds and hearts of its citizens.  Without Christian values a nation ultimately ceases to be united and free.

Our Rights Are God-Given

Fourth, in his book “To Renew America” former history teacher and House Speaker Newt Gingrich describes how many previously great countries and civilizations in history have ultimately fallen and disappeared.

Given the example of history, we cannot assume that America will continue to be great or will even continue exist if we lose our moral compass (Newt Gingrich 1995).

The Declaration of Independence declares our creator (God) to have bestowed upon us the “unalienable” rights of life, liberty and the pursuit of happiness.

“Unalienable” means these rights are God-given and cannot be taken away by earthly authority.  In other words, our liberty and freedom as a people and as a nation come from God and our faith in Him. He (God) has given us these blessings of liberty, and they are not for anyone else to take away, or to infringe upon.

The Bible truly has the best direction for life’s challenges.  However, without the foundational principles articulated through the Judeo-Christian tradition of faith in God, there is no basis for the unalienable rights, for morality, or for a moral compass for the Republic.  The natural inevitable consequences are tyranny, poverty, chaos, and slavery.

Thus, without a Godly and sovereign foundation of patriotism and faith, both America and freedom die.  It is therefore the right, duty and responsibility of every generation to tenaciously secure, defend, and promote the drivers and blessings of liberty.

In the words of Benjamin Franklin, “Those who would give up essential liberty to purchase a little temporary safety, deserve neither liberty nor safety.”

The Price of Freedom and Faith

Freedom is not free, and we need to be constantly vigilant and proactive about keeping ourselves and our Republic healthy.  I thank God for those who have the moral courage and will to fight the ongoing internal and external threats to our freedom which constantly are being waged against us.

“In God we trust” and patriotism really do matter!  May God continue to bless America!