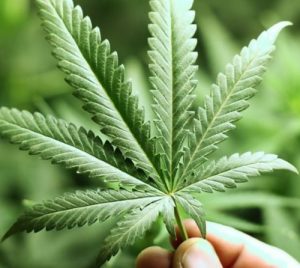 My grandfather was a “Weed Inspector” in Illinois.

This retirement job made him little extra money. Mostly it gave him an excuse to ride his motorcycle and interact with farmers.

My grandfather’s job was to find cannabis where it grew across the rural countryside and to make sure it was legally disposed of.

My grandfather explained to me that cannibis was historically grown commercially in Illinois (and other areas) as hemp which because of its fibrous qualities was widely used to make rope (particularly for sailing ships).  This was the case from Revolutionary times up to just after the Second World War, and hemp still grew wild in many rural areas.

Cannabis is a legally controlled plant due to dangerous ways your body can respond to the chemical compounds it contains when ingested.  For decades, growing hemp and marijuana has been illegal, and legitimate scientific research on medical use has been very limited.

Marijuana and hemp are genetically different variations of Cannabis, and are actually two different common names for the cannabis plant.

One variety known as marijuana (or “pot”) is best known for people who abuse it for the psychoactive chemical “high” (mental status change) it produces due to high levels of a cannabinoid compound called THC.

While marijuana has a fairly high concentration of THC, cannabis grown as hemp has a much, much lower concentration. Hemp therefore generally is developed for industrial purposes (food, oils, fabrics and plastics).

It would take a LOT of hemp smoke to give you the effects of marijuana.  You’d likely die of smoke inhalation long before you’d get high from smoking hemp.

Hemp plants instead have a higher concentrations of a different cannabinoid compound called CBD which while not having the “high” effects of THC, many believe it has some pain reducing and other potential medical value (https://www.leafscience.com/2014/09/16/5-differences-hemp-marijuana/).

In Wisconsin, CBD oil is allowed but is highly regulated. It requires a medical doctor’s prescription and can only be legally distributed with no THC content by a licensed and certified pharmacy with an FDA investigational drug permit (Wisconsin Controlled Substance Board, Section 961.34 & 961.38 Wisconsin Statutes, https://www.doj.state.wi.us/news-releases/ag-schimel-issues-guidance-wisconsin-law-enforcement-cbd-oil-and-industrial-hemp).

The use and availability of pot (marijuana),  hemp products, and CBD oil derived from hemp is currently a hot debate topic.

Here are some considerations:

First, how you think matters and reality is the safest place to be. In 2009, a young single mother in Tomahawk died in an apartment fire due to the fact she was stoned at the time after having consumed marijuana (http://www.weau.com/home/headlines/40659542.html ).

While she was alert enough to call the fire department after realizing her apartment was on fire, her consumption of marijuana with its high concentration of THC had severely impaired her judgement, making her paranoid and anxious.

When neighbors banged on her door pleading for her to get out, she ran into her bathroom and locked the door. Ultimately she perished in in the fire because being high on THC impaired her thinking.

Tragically as well, being high on marijuana while driving has also reportedly caused a spike in traffic-related deaths according to the American Auto Association (https://www.today.com/health/driving-while-high-marijuana-causing-spike-fatal-accidents-t91746).

Consider research which has also shown that marijuana usage reduces IQ  an average of 8 points, creating permanent deficits in memory and concentration (https://www.forbes.com/sites/travisbradberry/2015/02/10/new-study-shows-smoking-pot-permanently-lowers-iq/#5b37b6cd2f5b).  In other words, consumption of marijuana literally is causing brain damage!

Deaths from overdosing with marijuana also are on the rise (https://www.foodsafetynews.com/2015/03/third-death-in-colorado-linked-to-edible-marijuana/, https://www.huzlers.com/59-people-die-of-marijuana-overdose-in-colorado-and-washington/ ).  Recent overdosing in Wisconsin has also been in the news (https://herb.co/marijuana/news/synthetic-cannabis-wisconsin/ ).

Based on all this, I find the term “medical marijuana” overall highly deceiving.  Too often this term seems to be pushed extensively as a legitimizer for individuals who want to get high legally in spite of the cost to society.

In my mind it sounds similar to an alcoholic who wants to have taxpayer provided “medical alcohol” available to them; most would agree the “medical” outcomes of such a proposed health care intervention would be a disaster.

Third, protective laws matter.  States like Colorado which claim legalized “medical marijuana” (the Federal government still bans it, https://www.usatoday.com/story/news/2016/08/11/dea-marijuana-remains-illegal-under-federal-law/88550804/ ) have a lot of black market pot still being sold and consumed as well as higher health care costs due in part to the effects and complications from that consumption.

This primarily is due to the consumer demand for higher concentrations of THC for individuals desiring a bigger high (https://www.nbcnews.com/storyline/legal-pot/emergency-room-visits-double-marijuana-using-colorado-visitors-n525081).

Many of the Mexican drug cartels have been lacing marijuana they sell with the deadly opioid fentanyl. This creates an extreme high as well as severe opioid addiction (http://www.dailyitem.com/news/dea-fentanyl-a-deadly-force-in-opioid-crisis/article_dfc883cf-ceef-5e46-b50e-aaca1585f7f8.html).

For those who are not killed by this intended or unintended consumption of fentanyl, they immediately become addicts and are typically are willing to do anything (i.e. lie, steal, prostitute themselves etc.) to get more of the drug.

The associated results include increased violence, and human trafficking that is the modern day form of slavery. To call it a massacre is perhaps putting it too lightly. Consider that in 2016 more people died from their use of opioids than died in combat during the entire Vietnam war! (https://www.cdc.gov/drugoverdose/data/overdose.html, https://www.cbsnews.com/news/opioids-drug-overdose-killed-more-americans-last-year-than-the-vietnam-war/ ).

Next, we need to honestly analyze the disastrous financial and human costs of harmful drug usage outcomes.  It is said that man is the only creature who can make a trap and then walk into it.

There are many ongoing threats to our freedom both as a nation and as individuals.  The entertainment industry, media and advertisers are prime drivers of these threats, often playing on people’s insecurities and ignorance.

Using medical problems as an excuse to get high is not going to improve the quality or reduce the cost of health care.  Law makers must carefully and responsibly base policy decisions on legitimate research or we will reap more the same disastrous outcomes as the horribly mismanaged opioid epidemic.

Good health care safely empowers individuals by helping them to help themselves as much as possible. That’s freedom … a much better high!!!